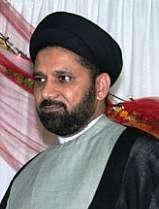 Hujjat ul-Islam as-Saiyed Mehboob Mehdi ‘Abidi al-Najafi is the son of as-Syed ‘Abul Hashim ‘Abidi. He had his early education in Najaf at Madrasa as-Sadiq under the tutelage of Hujjatul Islam Shaykh Munir at-Turaihi, Shaykh Ibrahim Gharavi and Ayatullah Syed Kazim ash-Shubbar. His family became the target of the ruthless regime of Saddam and he was forced to leave the holy city of Najaf and migrated to Delhi, India. He went to Madrasa Nazimia, Lucknow, India, to pursue his studies under the tutelage of Hujjatul Islam Moulana Syed Muhammad Ayyub Naqavi, Hujjatul Islam Moulana Syed Muhammad Shakir Naqvi, Hujjatul Islam Maulana Muhammad Ghaffir Jawrasi and completed his Sutooh studies under Hujjatul Islam Shaykh Muhammad Husain Najafi and other teachers.

While living in India and even during his student years he always preached about Islam in different cities and places. He was Imam Jama’at at the Masjid of Imam ‘Ali an-Naqi, in New Delhi. He is just (‘Adil), highly learned and well-versed in Islamic Laws and posses commanding knowledge of Qur’an. He speaks Arabic, Persian, Urdu and English languages fluently.

He is an excellent orator. He is highly respected, regarded and honored by all Shi’as in Chicago as well as in other cities in United States of America, United Kingdom and Canada. He often visits other cities in the aforementioned countries to address Majalis & Jashan throughout the year, especially during the Islamic months of Muharram, Safar and Rabi-ul-Awwal.

He has been working tirelessly to improve the Chicago-area community, and to make it one of the most advanced and premiere Shi’i ithna ‘Ashari Muslim communities in America. He recognizes the special needs of the community especially, living in a Western country. He has participated and hosted several events to spread the message of Islam and the Holy Ahl al-Bayt, peace be with them. At DePaul University and University of Illinois, which are amongst the prestigious universities in Chicago, he spoke to Muslim and non-Muslim students alike about the Shi’i faith to foster understanding about the beliefs.

Additionally, he supports the initiatives in the community to host Islamic programs in different languages, especially in English, in order to cater to the needs of the youth and the growing number of converts to Shi’i Islam. He fosters the growth of our community and carries the potential to the next level.

Listed below are some of the projects undertaken by Hujjat ul-Islam as-Saiyed Mehboob Mehdi ‘Abidi al-Najafi for the benefit of our community: